We elected new officers tonight for the Baton Rouge SQL Server User Group Official PASS Chapter, the second year in a row we've made an effort to do so.

We started electing officers in 2014 (after our annual SQL Saturday) in order to serve four goals:


To be honest, we had mixed results in the first year. We're still rounding out who some tasks should be owned by, and peeling more and more tasks away from myself, and finding the right sense of volunteerism between meetings.

If you're considering having "elections" for user group officers, it's worth a try. Don't be surprised if the spirit of hesitance and collegiality leads all officers to be elected unopposed, with humble candidates try to out-humble eachother to cede victory to the other, or for some folks to run in absentee, or both. And that's totally okay.

This isn't supposed to be competitive officership. And if someone doesn't "win" an office and still wants to help? Great! As a leader, never shut down this sort of enthusiasm. Find some way to involve and foster that sense of ownership. Then, trust them to get the job done. Trust, but verify.

If you're curious (and these aren't original to us), here's the officers we elected tonight. Our buddies in the Baton Rouge .NET User Group elected their four as well.

Email ThisBlogThis!Share to TwitterShare to FacebookShare to Pinterest
Labels: usergroup 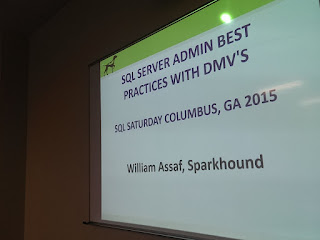 Thanks for joining us at SQL Saturday Columbus today on a gorgeous day to go inside and learn about SQL Server! And even bigger congrats to those of you who use Google maps and were still able to find the brand new event location at the Troy State University Riverfront campus!

My colleagues Cody Gros and John Walker joined me on a trek from Louisiana earlier this week and I was so happy to see my SQLSaturday friends, including the great and magnificent SQL Saturday empress Karla Landrum, once again.

A special thanks and job well done to Tim Radney for organizing this top notch event throughout a rough week and the loss of his father. Friends are all over the place Tim, glad so many of us could be here today to tell you this in person instead of from afar. Great job, great facility, great event, great people.


Here are the downloads for two presentations. These presentation files are also available on the SQLSaturday event website.

Sorry, no, we won't be uploading our Sparkhound Jeopardy game from the lunch session. Can't be giving away all our answers! Er, questions.
No comments: