Thanks for joining us at SQLSaturday Memphis this weekend, and kudos to all the organizers for a well-run virtual event!

Microsoft is offering any one certification exam for USD15 to anyone who has become unemployed or furloughed due to the pandemic this year. If you're interested in learning more about how to prep cert exams, how they're written, and how the test questions are constructed, I'm presenting on this topic.

9:40AM: Certification Exams Inside Out | Slidedeck available for download here

Both my wife and I were on the schedule, and the organizers chose interesting nontechnical topics for both of us. Christine's presentation at 10:50AM: Organizational Trauma: Supporting Mental Health During a Crisis.

Email ThisBlogThis!Share to TwitterShare to FacebookShare to Pinterest
Labels: sqlsatmemphis

Historical data analysis that is naïve to past discrimination is doomed to parrot bias. How do we combat bias in our data analytics?

First, we already know that complex, multi-talented teams are best-suited to face complex, multi-faceted problems. A more diverse group of researchers and engineers is more likely to recognize and think harder about bias problems that may impact them personally. “It’s difficult to build technology that serves the world without first building a team that reflects the diversity of the world,” wrote Microsoft President Brad Smith in Tools and Weapons (2019).

Second, data collection is often provided to us through real-world interactions, subject to real-world bias. No real-world data exists in a vacuum. We should understand that bias in data collection and analysis may be inevitable but is not acceptable. It is not your responsibility to end bias (though that’s a worthy cause), but rather to be proactively informed and transparent.

Look for systemic outcomes, not intentions. Only in outcomes are potential disparate impacts measured. Let’s review a couple of examples.

Many Americans are familiar with the ACT test, an exam many students take as part of the college application process.  In 2016, ACT admitted an achievement gap in composite scores based on family income. According to ACT’s own data, there is a 3-4 point difference in scores between poorer and wealthier households, and the gap continues to widen.

Credit to ACT for disclosing their research. Transparency is part of accounting for bias in historical data and data collection and is critically important to furthering a larger conversation about inequality of opportunity.

Recently, more than 1,000 American institutions of higher learning have adopted test-optional admissions policies, meaning they no longer ask for the ACT (or SAT, a similar exam) on applications. An overwhelming amount of studies have been conducted suggesting that the ACT does NOT predict college graduation outcomes as strongly as other factors, including high school GPA and household income.

Knowing the variables involved in your analysis is important. When conducting analysis, researchers must review, identify, and anticipate variables. You will never find the variables unless you are looking for them.

This is why a proposed new rule by the United States Dept of Housing and Urban Development in 2019 stirred a massive reaction from technologists and ethicists alike. The proposed rules, yet to be implemented, would make it nearly impossible for a company to be sued when racial minorities are disproportionately denied housing, as mortgage lenders or landlords could simply blame their algorithm to avoid penalty.

Centuries of racially-divided housing policies in the United States evolved into legalized housing discrimination known as redlining, ensconced in federal-backed mortgage lending starting in the 1930s. The long history of legal racial housing discrimination in the United States was arguably not directly addressed until the 1977 Community Reinvestment Act. Yet today, 75% of neighborhoods “redlined” on government maps 80 years ago continue to struggle economically, and minority communities continue to be denied housing loans at rates far higher than their white counterparts. If discriminatory outcomes in housing are to change for the better, the algorithmic orchestration of mortgage lending should not be excused from scrutiny.

In both cases, we examined industries where algorithms draw from data revealing larger societal outcomes. These outcomes are the result of trends of economic inequality and a pervasive opportunity gap. Are such data systems to be trusted as the result of an algorithm, and thereby inherently ethical? No, not without scrutiny.

These provide examples of when data professionals must be aware of the historical and societal contexts from which our data is drawn, and how the outcomes of our data findings could be leveraged. Would our outcomes contribute to justice?  For example, the industries of financial marketing, healthcare, criminal justice, education, or public contracting have histories checkered with injustice. We should learn that history.

Transparency is desirable. It is needed to aid an informed societal conversation. We should not that assume an algorithm can overcome historical biases or other latent discrimination in its source data. Informed scrutiny should gaze upon historical data with a brave and honest eye.

Prepping the local SSD D: in an Azure VM for SQL Server TempDB

One of the few good, safe uses for the local SSD volume of an Azure VM is for SQL Server TempDB data and log files. There's a gotcha. Let's discuss.
Note: this blog post will be updated as I get clarification, specifically to solution 3b below. See comments.

Typically this is the D: volume of an Azure VM, though not always in the case of migrated VMs.
Moving your SQL Server instance's TempDB files to the D: volume is recommended for performance, as long as the TempDB files fit it the D: that has been allocated, based on your VM size.
When the D: is lost due to deallocation, as expected, the subfolder you created for the TempDB files (if applicable) and the NTFS permissions granting SQL Server permission to the folder are no longer present. SQL Server will be unable to create the TempDB files in the subfolder and will not start. Even if you put the TempDB data and log files in the root of D:, after deallocation, that's still not a solution, as the NTFS permissions to the root of D: won't exist. In either case, SQL Server will be unable to create the TempDB files and will not start.
In the Windows Application Event log of the Azure VM, you'll see something like:

There are three solutions to this problem in Windows. To test any of these solutions, don't just restart your VM, you have to deallocate it (stop it in the Azure Portal, then restart it). That's the way to be sure the contents of D: has been lost. However, data on the temporary disk may be lost during Azure maintenance, which is mostly out of your control, so it is important to solve this issue when using the D: for TempDB.
Note that simply shutting down the Azure VM from inside operating system does not deallocate the VM, it only stops the VM. During a normal, successful reboot of the VM OS, data on the D: will not be lost. A reboot initiated from inside an RDP session, for example, shouldn't trigger the contents of D: to be lost. You must stop the VM from the Azure Portal to deallocate the VM. This is the difference between a VM's status of "Stopped" or "Stopped (deallocated)".

The first solution it appears is the one Microsoft documented years ago here. A simple PowerShell script running in Windows scheduled task, triggered on Startup. It also requires setting the SQL Server service to "Automatic (Delayed Startup)".
The script creates the subfolder on D: for the TempDB, then grants permissions to the SQL Server service account, before SQL Server tries to start.
This type of script and delayed startup is a yet-unsolved necessary complication, but this solution works fine.

The second solution is to place the TempDB files on the root of D: but then make the SQL Server service account a local Windows administrator, so that it has permissions to write to the root of D:.  This violates most security best practices (though it is more common than you'd think).
Key here is placing TempDB in the root of D:. Even as a member of the local Administrators group on the server, SQL Server will not create subfolders upon startup, and a subfolder on D: won't exist after deallocation.
I'm not a fan but it's a solution, and this is certainly the simplest solution, both to implement and maintain.

A third possible solution involves the Azure SQL VM Resource Provider. It places the SQL Server IaaS Agent Extension that connects the SQL instance to the Azure portal for all sorts of easy integrations, bringing a lot of manageability to the Azure Portal. It is generally highly recommended.
The SQL Server IaaS Agent Extension should handle preparing D: for the TempDB, solving startup issues for an Azure VM with SQL Server. This definitely works for VM images with SQL Server from the Azure marketplace, which by default configure TempDB on the local SSD D: anyway. I have tested this out with the newest "SQL Server 2019 on Windows Server 2019" image available in the Azure Marketplace. It works. For example:

"If you create the VM from Azure portal or Azure quickstart templates and place Temp DB on the Local Disk then you do not need any further action." Turns out, Solution 3 here is very similar to Solution 1. When installed from the marketplace with the SQL Server IaaS Agent installed, the Azure VM has a Windows Scheduled task triggered At Startup to call "C:\Program Files\Microsoft SQL Server IaaS Agent\Bin\SqlIaaSExtension.SqlServerStarter.exe".

I speculate that this app runs on startup to prep the D: for TempDB, handling the permissions on D:\TempDb subfolder for the SQL Server service account, which is not a member of the local admins group by default. In this case, unlike Solution #1 above, the SQL Server service is not configured to "Automatic (Delayed Startup)", it is still configured to "Automatic", as usual.
Again, to test this out, don't just restart your VM, you have to deallocate it (stop it in the Azure Portal, start it). That's the way to be sure the D: has been deallocated and restarted.
I have split this solution into two parts because 3a only appears to work if SQL and the SQL VM Resource Provider are pre-installed via the image gallery. 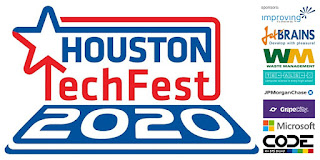 It's a full day at Houston Tech Fest 2020 for us. Speaking at Houston TechFest is an decade-long annual tradition interrupted only by a hurricane and one year where I missed it to be at a wedding. This year for the first time it's all-online thanks to a host of great volunteers acting as virtual moderators.

Christine and I each presented four times (once jointly) and each were recorded to Youtube: