Recently I had a client and their vendor trying to configure a firewall for a new installation of SQL Server 2019 on Windows Server 2019.

Connections to the SQL Server were being blocked by the firewall. Looking at their firewall logs, they saw connections blocked on port TCP 49153. Why? Why not TCP 1433?

This was a pretty simple problem to solve, and not uncommon to face right after installing a SQL Server named instance.

Default instances use TCP 1433 by default, but this isn't "the default port for SQL Server" necessarily. Named instances can be configured to use TCP 1433, but by default, named instances are configured to use dynamic ports in a range between 49152–65535. Most importantly, a SQL Server using a dynamic port will change port every time the Database Engine service starts up. This is incompatible with port-based firewall rules unless you unwisely choose to specify a huge range of port exceptions for your firewall (not recommended).

For connections external to the SQL Server, the SQL Browser (UDP 1434) handles the connection and routes traffic to the correct TCP port for each instance, even if there is only one instance on the server. (The SQL Browser isn't required, if you'd rather always specify a port number in all connection strings, or set up SQL alias(es).)

The solution to the dynamic port problem is to change the SQL Server to use a static port. You can configure a named instance to use TCP 1433, though it may be misleading and confusing if another SQL Server default instance is ever installed on this server. Instead, choose any port in that same range, for example the one most recently dynamically assigned.

How do you configure a SQL Server instance to use a static port instead of a dynamic port? (This change won't take affect until you restart SQL Server service, so I recommend you only make this change during a maintenance window.)

For example, if you want to use only the primary internal IP address, and configure it to use port 52057 (a random selection in the allowed range), this is what your screens should look like, with Listen All disabled. 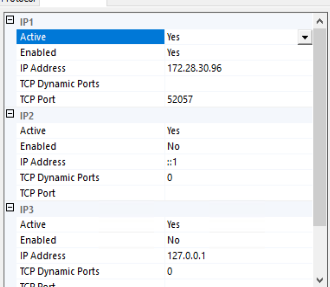 If you need then to configure Windows Firewall, it would look something like this in an Inbound rule. Here's an example with a rule to allow two different SQL instances, each configured for a different static port.